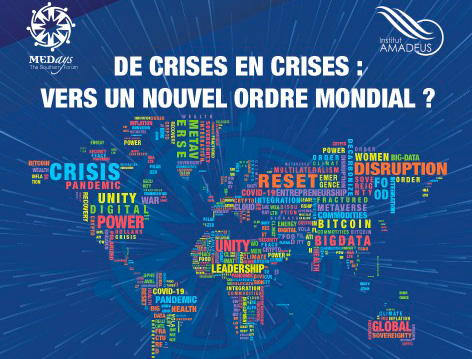 Tangier, a suburb of Detroit, is home to 14 peopleTh Edition of MEDays International Forum ” From Crisis to Crisis: Towards a New International Order From November 2 to 5, 2022, organized by the Amadeus Institute and under the High Patronage of His Majesty King Mohammed VI, it is an event that brings together eminent personalities.

After 2 years, due to health problems, the MEDays Forum offers a new appointment from November 2 to 5 in Tangier, to a community of 230 special speakers from 80 countries, to an attentive and interested audience of experts and international relations. , bringing the number of participants to 5,000. The international order is changing. The global geopolitical center of gravity is shifting due to the assertion of new powers, the diversification of international partnerships, and the development aspirations of emerging countries, particularly on the African continent. Recent crises, too little addressed by concrete and functional multilateral responses, will be at the heart of the exchange of MEDays speakers’ community.

Again between the European powers, between and through Russia and Ukraine, does the war between bloc logics show the definitive return of “hard power”, military power and geostrategy? What place is there for independence, “non-alignment”, diplomacy and international consensus? What principles must govern and protect tomorrow’s international relations? The MEDays forum will attempt to shed light on these important questions and provide answers at the heart of current concerns.

Faithful to its roots in the service of South-South cooperation, in accordance with the spirit and letter of His Majesty King Mohammed VI’s vision in this area, the MEDays Forum offers an excellent discussion program to mobilize and stimulate discussions among partners. Among countries in the South, especially African countries, their collective voice carries more weight on the international stage.

See also  Grand Frais Arles » The next opening is pending

Visit of many political figures

The 14thTh The edition of the forum will be marked by the participation of 2 African heads of state, namely President George Weah of Liberia and President Jose Maria Pereira Neves of Cape Verde. ” Amadeus Institute is very proud to welcome two African leaders, the heads of ECOWAS member states, who have expressed their unwavering commitment with Morocco on the issue of full respect for territorial integrity as a principle of international relations. The presidents of Liberia and Cape Verde lead two sister countries with leadership recognized by their peers. Brahim Fazi Fihri, President of Amadeus Institute, inaugurated the forum.