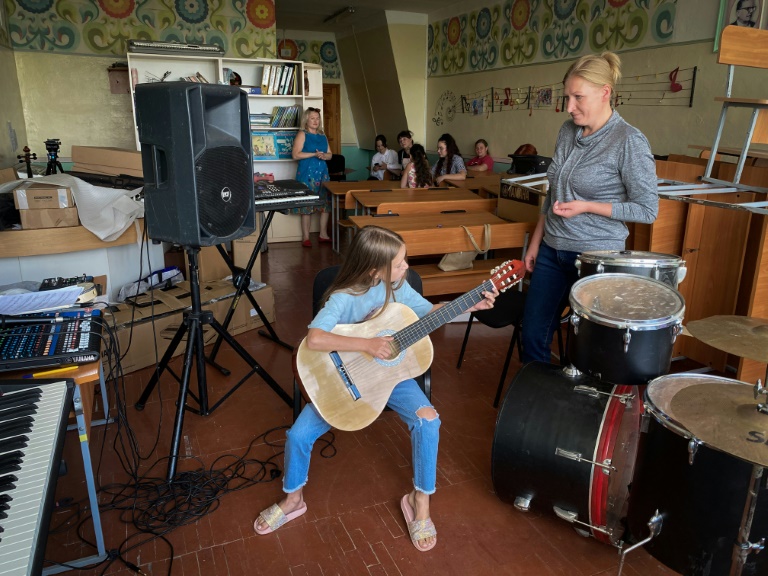 Piano teacher Oksana Shevchenko points to a pile of twisted metal and cement. This is all that remains of the school where he worked for 30 years, pulverized during the Russian occupation of Borodianka, a northwestern suburb of Kew.

“Earth and nothing else. A burnt wasteland instead of a cultural place where children study… It was the destruction of culture and Ukrainians by the Russian invaders,” begins Ms. Shevchenko, 53.

An hour’s drive from Borodyanka, a town of 14,000 people before the Russian invasion launched on February 24, the Ukrainian capital bears deep scars from Moscow’s attempt to seize it.

With most of its buildings in ruins or damaged, the main street is a stark testimony to the disaster.

According to city hall officials, 12 residential buildings were demolished and 24 were damaged. More than 400 houses were affected.

Their buildings destroyed, the police, prosecutor’s office, post office and town hall now share a school that survived the bombings.

Ms. Shevchenko also conducts music lessons there for children who returned after the liberation of Borodyanka on April 1.

Along with the piano, the children sing the anthem of Ukraine in chorus.

“We meet and create. It was painful to have it taken away from us,” he says in a small classroom filled with musical instruments.

“It adds to the stress when you lose a career you love and kids lose their favorite activities. It creates a sense of oppression. »

According to Ms. Shevchenko, the music school, which had 160 students before the war, has benefited from numerous donations from NGOs and Ukrainian and foreign individuals. A rock band recently gave them a keyboard, drums and guitar.

“There are children who want to go home. They are coming back, and so are the teachers. So by ourselves and with the help of charities and kind people, we started refurbishing our stuff,” explains Ms. Shevchenko.

In a crowded classroom, 15-year-old Diana Cowtown sings a popular Ukrainian song. She left Borodianka on the first day of the war, but returned.

“Earlier, I thought whether I should go for a job or study abroad. Now I am sure that I want to study in Ukraine. I want to live here,” she said.

Guitar teacher Tetyana Krivochienko is also back to teach. Her lip trembles and she cannot hold back tears as she recounts her escape from Borodianka.

“We had to go on foot so as not to meet any Russians. We walked 10 kilometers through the fields at night to the neighboring village of Zagaltsi,” he told AFP.

“The children were crying. Their arms hurt from being dragged along. My child asked me not to hold his hand anymore,” she recalled.

He traveled to western Ukraine before returning to Borodianka in early May.

“Music is healing, because it helps you disconnect from your problems. Even people abroad, children asked me to continue my lessons,” explains Ms. Krivoseyenko.

More than 150 people, including eight children, died in Borodianka during the Russian offensive.

The city currently has about 9,000 residents, according to Interim Mayor Georgy Iarko, whose office is also at the school. Almost half of them do not have a home.

“If the roof leaks, you have to fix it to live in the building. The same goes for a city. Borodianka is not a ghost town. The war will end. Life will go on,” he says.

“I hope everything goes well. People are back and they have to live as normal. We are working hard to ensure that,” he concludes.