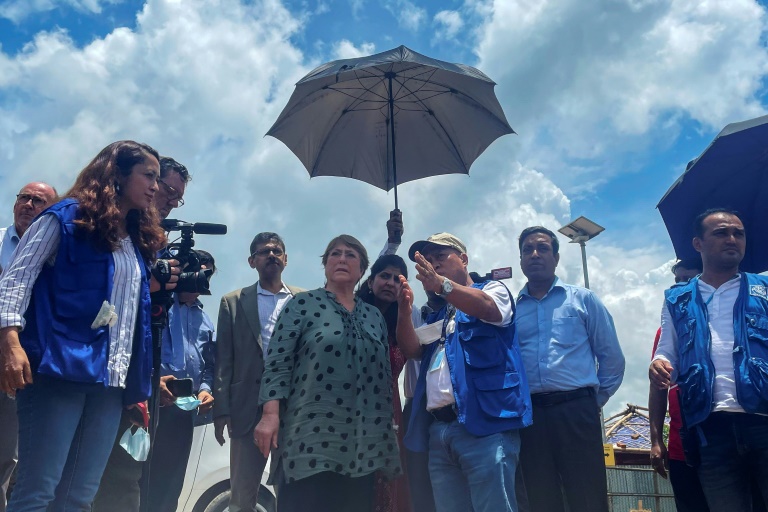 UN Human Rights Commissioner Michelle Bachelet visited Rohingya camps in southern Bangladesh on Tuesday, where refugees have pleaded for protection after a series of killings and rising crime.

As part of her four-day trip to the South Asian country, Ms. Bachlett spent several hours in the maze of Rohingya camps in Cox’s Bazar district and met with leaders of the community, according to officials.

About 750,000 Rohingya fled military abuses in Burma and sought asylum in neighboring Bangladesh in 2017, where there were already more than 100,000 refugees, victims of previous violence.

Two leaders from the Rohingya community were recently shot dead in one of these camps, where security remains an ongoing problem.

Mme Bachelet “wanted to know about the killings in the camp. We discussed it,” 30-year-old imam Moulvi Zafar told AFP by phone.

“We talked about strengthening the security of the camps. We demanded protection,” he added.

Last September, Rohingya leader and peace activist Mohib Ullah was assassinated. A demonstration by some 100,000 refugees, which he organized to mark two years since their departure, made him famous.

Police have not named any suspects, but Rohingya sources told AFP that the Arakan Rohingya Solidarity Army (ARSA) insurgency, which operates in Rakhine state (western Burma) and camps in Bangladesh, was behind the leaders’ killings.

Bangladesh’s refugee commissioner Shah Rezwan Hayat told AFP that Ms Bachelet had inquired about some of the incidents in the camps and assured that “all kinds of measures have been taken by the government to improve security.

See also  Morocco-Nigeria. A promising partnership for Africa, according to a US official

He further informed that the High Commissioner has also touched upon the education and livelihood of the Rohingyas who do not have the right to work. In this context, he promised that the government would gradually improve the education of all refugee children in the camps.

Michel Bachelet is scheduled to address reporters in the capital Dhaka on Wednesday. The 70-year-old former president of Chile is set to resign from his post at the UN later this month.