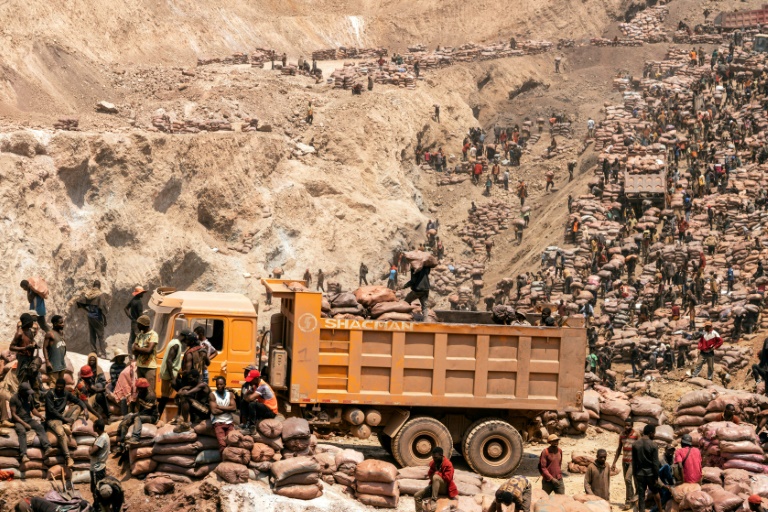 Thousands of “diggers” continue to extract pickaxes from Shabara’s open-pit cobalt mine in the southeast of DR Congo, enough to live and feed their families, while officially they are not entitled to it. There for many years.

“We are fighting for them to leave us in peace,” said one of these artisans, Marcel Cabamba, during a break, whose work earns up to $200 a week – a good sum, in a country where three-quarters of the population live on less than two dollars a day.

Beside him, porters painfully carry bags of blue-green ore on men’s backs, whose use in cell phone and electric vehicle batteries makes them a product of the future and energy transition.

Prices fluctuate, but a tonne of ore is currently trading at around $50,000.

Shabara, 45 km from Kolwezi in Lualaba province, is emblematic of the Democratic Republic of Congo’s difficulty in preventing the illegal exploitation of cobalt, the world’s largest producer.

The country provides about 70% of the global supply of this mineral, but its poorly regulated artisanal mines, which represent a minimal share (about 5%) of its production, damage the image of Congolese cobalt.

Michel Bizimungu Lungundu recalls the day in 2015 when he learned that the Shabara mine, where he had worked as a trader for ten years, had been sold to a subsidiary of Anglo-Swiss commodity trading firm Glencore.

Under a 2010 agreement with previous majority owner Dino Steele, ‘diggers’ were tolerated at the site.

“We’re not going to give it up,” he says, adding that he believes local people have a right to benefit from the lucrative ore.

However, under Congolese law, for the past 20 years, diggers have only been allowed to work in government-designated “artisanal mining zones” (ZEAs). But most artisanal miners say these areas are worthless and refuse to budge.

“It’s an obvious problem,” ruled Glencore’s business manager in the DRC, Marie-Chandel Kaninga, during a recent mining meeting in Kinshasa.

“With 40 truckloads of ore leaving Shabara every day, it’s clear these operations are not the work of small-scale artisans,” said a spokesman for Glencore, which helps diggers agree to join the ZEA.

A 2018 reform of the DRC’s mining code to allow the Congolese government better control over the trade in cobalt, which Kinshasa classifies as a “strategic” metal, increases taxes on the industrial mineral.

In 2019, the General Cobalt Company (EGC) was also created, a state-owned company with a monopoly on the procurement and marketing of artisanal ore produced in dedicated areas.

The aim was to develop the artisanal cobalt sector and improve its quality allowing the state to increase its revenue. But EGC is still waiting to buy its first ton of cobalt as most miners refuse to venture into these areas.

“It’s a mess”, admits a senior Kolwezi official, especially since Kinshasa appears to have randomly chosen the location of this ZEA, which was avoided by diggers.

The Congolese Ministry of Mines did not respond to inquiries by AFP.

Sasha Leshnave, a consultant to the American NGO The Sentry, author of a study on Congolese cobalt mines, believes that many reform projects in the sector have failed because some actors are interested in “maintaining the status quo.”

Sources indicate that political leaders have close links with artisanal mines and want to protect their operations.

In addition, the number of artisanal cobalt miners is estimated at 200,000, making their mass mobility more complex.

“This is the Wild West of mining,” said one analyst, for whom Congo would be wrong to walk away from cobalt.

David Sturms, director of the “Fair Cobalt Alliance” (ACE, an industry initiative), believes that mining companies and diggers all have an interest in restoring its image.

“The conditions for the exploitation of artisanal Congolese cobalt do not meet international expectations,” he said. “But they won’t improve until we invest in them, and we can only invest if we solve the legalization issue.”