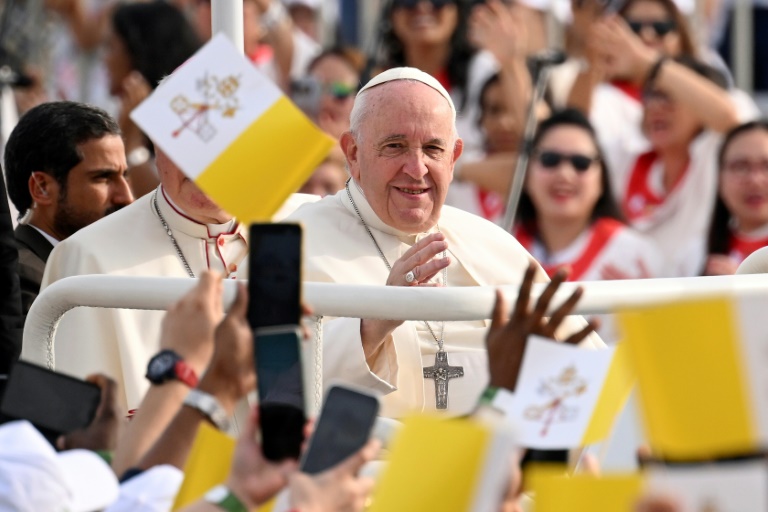 “It’s a lifelong dream”: With Vatican flags and smartphones in hand, some 30,000 people turned out emotionally for Pope Francis in Bahrain on Saturday, the third day of his visit to the Muslim Gulf kingdom.

“We’ve been here since one in the morning and we haven’t slept. We are so excited to see the Pope! “, Philomena Abranches, a 46-year-old Indian volunteer who participated in the organization of the event, told AFP.

“It is everyone’s lifelong dream to come and see it. We all call him + Dad +. Above all, it represents peace in the world, which is what we need right now,” he adds.

Like her, many believers, families and religious from Asian countries or other countries of the Arab world arrived at dawn at the country’s largest sports arena, located in Rifa, south of the capital Manama.

In a four-day visit – the first by a pope in the island nation of 1.4 million people – Argentina’s sovereign pontiff greeted and blessed crowds as he arrived aboard his “Popemobile,” hugging babies and children as the faithful cheered. .

” It’s here! “, some, many people destroyed the scene with their smartphones, while children sat on their parents’ shoulders trying to see the man in white.

“Since John Paul II the awareness that the apostolic journeys of popes make it really possible to go to the hearts of nations, of Christian peoples,” explains Brother Emmanuel Pisani, director of the Dominican Institute for Oriental Studies. In Cairo, he sat in the front row.

“Despite his real shortcomings, Pope Francis pursues this,” he adds in front of the stage, where a golden cross dominates an altar framed by two large screens.

George Bergoglio, who turns 86 next month, suffers from chronic knee pain and is confined to a wheelchair.

In his Spanish-language sermon, he called for “universal brotherhood that lives firmly” in a country that is “a living embodiment of the harmony of diversities.”

Marguerite Heyda, 63, says she is “lucky” to be attending the “biggest event of the year” as speakers play the choir’s songs in English and Arabic.

“Usually people go to Italy to see the Pope, not always. I saw him in church yesterday and will see him today. I was able to shake his hand and receive his blessing,” says this Christian from Bahrain.

The kingdom, which formalized diplomatic ties with the Holy See in 2000, has about 80,000 Catholics, mostly Asian workers, according to the Vatican.

It will be the pope’s 39th foreign trip since his election in 2013 and his second to the Arabian Peninsula, which is due to continue until Sunday.