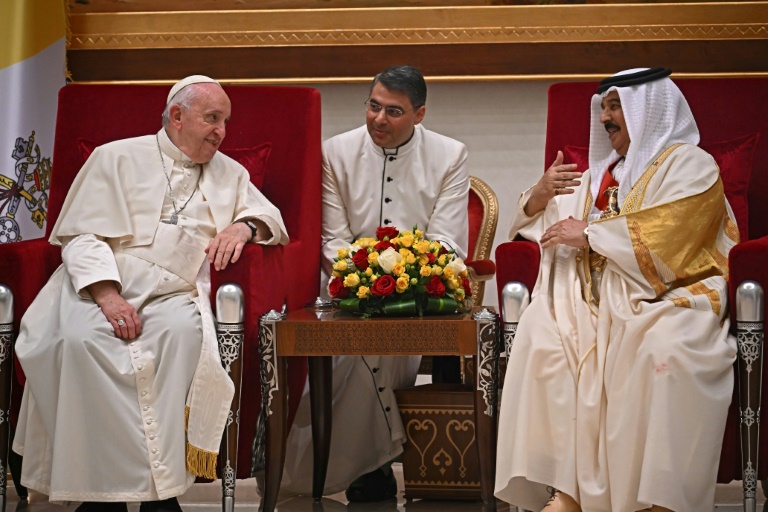 Pope Francis begins a day largely devoted to dialogue with Islam as part of his trip to the Gulf kingdom of Bahrain, where he called for respect for human rights and the death penalty the day before.

The four-day visit to the Arabian Peninsula comes after his historic visit to the United Arab Emirates in 2019, and comes amid calls from NGOs to denounce discrimination against the Shia community in the island nation of 1.4 million people. A Sunni dynasty.

At 10 am (0700 GMT), the sovereign pontiff is scheduled to deliver a closing address at the Forum for Interreligious Dialogue between East and West in Awali (center), in the presence of many political and religious leaders from the Middle East.

By mid-afternoon, he will meet with the Grand Imam of Al-Azhar, the venerable body of Sunni Islam, who signed the founding document on human brotherhood in Abu Dhabi.

The Argentine Jesuit will then speak before the “Council of Muslim Elders” at the mosque of the royal palace at 4.30pm (1.30pm GMT) and then during an ecumenical prayer at the Cathedral of the Holy Sepulcher, Arabia’s largest Catholic church. Peninsula, opening late 2021.

Bahrain, which formalized its diplomatic ties with the Holy See in 2000, wants to play the tolerance card to soften its appearance with this first papal visit to its soil, pledging that it will “not tolerate discrimination.”

But nine NGOs called on the Pope to “impose a halt to all executions in Bahrain, abolish the death penalty and seriously investigate allegations of torture and violations of the right to a fair trial”.

Arriving Thursday, Al-Saghir, the leader of the 1.3 billion Catholics, was greeted with military honors amid cheers, dances, songs and flower petals under the gold of the royal palace, where he gave a speechless speech to officials. and the Consular Corps.

In particular, he called for “fundamental human rights not to be violated, but to be promoted”, ruling that “it is necessary to guarantee respect and attention to those who feel most excluded from society, such as migrants and prisoners”.

The Pope emphasized that “the right to life must always be guaranteed”, “even to the condemned”, a reference to the death penalty, which is still practiced in the kingdom.

“After the 2011 Arab Spring protests, the use of the death penalty against pro-democracy protesters who dared to defend basic rights and freedoms in Bahrain has sharply increased,” Saeed Ahmed said on Thursday. Alwadei, Director Bahrain Institute for Rights and Democracy (BIRD).

Three weeks before the start of the World Cup in neighboring Qatar, the Pope called for a “guarantee of safe and humane working conditions everywhere”, pointing in particular to the fate of its foreign workers.

Saturday will be more dedicated to meeting the country’s Catholic community, which according to the Vatican has about 80,000 faithful, including a gathering in the national stadium.

During a flight to Bahrain, the pope, who turns 86 next month, told reporters accompanying him that he had “very bad knees” and was forced to use a wheelchair because of chronic pain.

This will be Francis’ 39th international trip since his election in 2013. He has visited more than a dozen Muslim-majority countries, including Jordan, Turkey, Bosnia and Herzegovina, Egypt, Bangladesh, Morocco and Iraq.