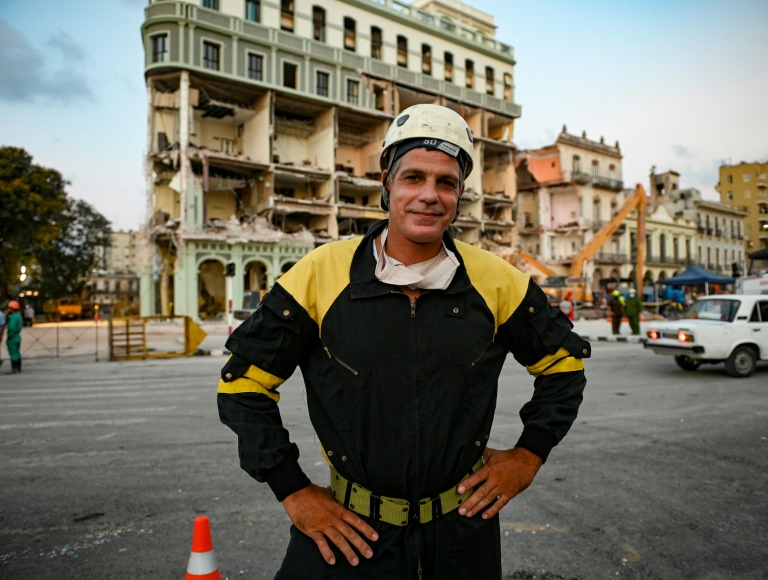 Four days after an accidental gas explosion at the iconic Saratoga Hotel in Havana killed at least 42 people, Cuban rescue workers continue their search for the wreckage on Tuesday.

46-year-old actor Tehran Aguilar laments, “It’s sad because there are so many deaths,” and “because of the children.”

Famous on the island for the TV series “Stories of Fire”, where he plays a firefighter, the actor works as a volunteer firefighter at the scene of the explosion, wearing a white helmet and black jumpsuit for several days. And yellow.

Not far from him, 48-year-old Edel Lobis hugs Yomi and her rescue dog, 12-year-old Labrador. “I did my part with my dog ​​who played a major role in this war and in facing this pain for our country,” he testified.

“I hope the country recovers, we’re back, and I’m sure yes,” says the expert on these core techniques.

Despite his experience in forensic medicine, 53-year-old Raoul Leone was devastated by the tragedy: “It’s shocking because I have never seen anything like it, but hey, we’re here, we’re trying to do the best we can. By supporting families, they can find their loved ones.”

On Friday morning, the luxury hotel in Old Havana was in final preparations before reopening Tuesday, closed for two years due to work and epidemics. Fifty employees were on site. A tank truck carried out the gas delivery.

Suddenly a huge eruption and a dense cloud of smoke: the first four bases flew in pieces.

“This explosion is the strongest I have ever felt in my life. I’m still in shock,” said Maria Victoria Solomon, 60, a teacher at a school near Saratoga.

With a broken voice and watery eyes, Nairobi Evora, 36, has been coordinating ambulances responsible for transporting the injured to various hospitals for the past few days.

“It touched me closely because my mother worked here for many years (at the Saradoka Hotel, editorial note). Many of her colleagues have died and I am trying to contribute here. We could not save all of them, but we saved many.

The 50-year-old Indy Guevara, also in a Red Cross uniform, is tired after this long day of work, but is determined.

Underneath the rubble, he said, “I will stay here until the last minute until they say there are no more victims.” “Even if this is the last one (the person rescued from the rubble) I hope they will be rescued alive.”