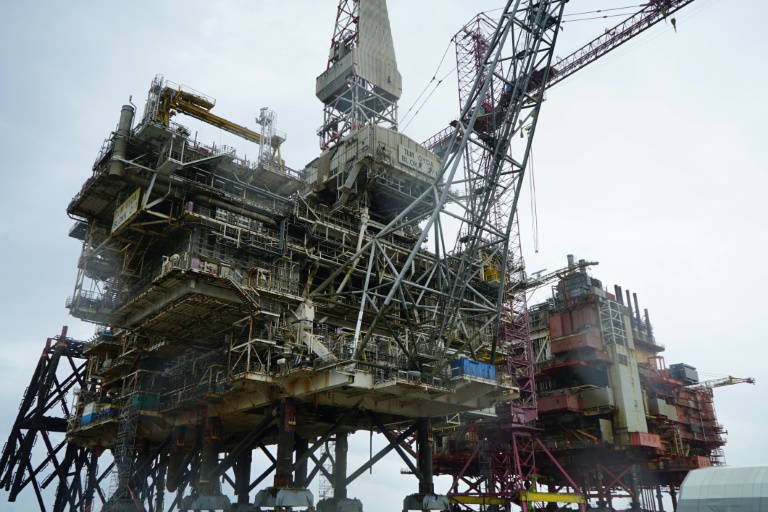 Rebirth in a graveyard: At this construction site in southwestern Norway, old oil platforms bear the symbols of the fossil age and prepare for a new life with the stamp of the circular economy.

Three gigantic and obsolete blocks, or a total of 40,000 tons of material, are being kept in the municipality of Stord, waiting to be dismantled and broken into pieces. And 98% should be recycled.

“If you come back here in a year and a half, you won’t see anything,” says Sturla Magnus, a helmeted senior manager at Acre Solutions, a group specializing in the construction of oil and gas facilities. .in removing them.

Behind him, workers are busy around three behemoths: the Kita deposit site, closed in 2020, and two from the Valhall deposit, still in operation, but which have had their day.

Safety inspections are carried out, electrical equipment and hazardous materials such as asbestos are removed and the remaining, now empty, large shells are fed to the machinery’s giant shears.

Among the most valuable – and most ubiquitous – waste, tens of thousands of tonnes of high-grade steel can be reused in new platforms, industrial structures or even offshore wind turbines.

Even today, if the company builds more oil installations than it demolishes, it extols the virtues of such recycling.

According to various estimates, a kilogram of recycled steel represents 58 to 70% less greenhouse gas emissions than a kilogram of brand new steel.

As the North Sea is one of the most mature hydrocarbon basins in the world, many oil and gas platforms are reaching the end of their life.

In a 2021 report, the trade association Oil and Gas UK (OGUK), which has since become Offshore Energies UK (OEUK), estimated that the total volume of platforms in these waters would be removed at more than 1 million tonnes.

“If you look globally, it’s close to 10,000 installations that will come down to Earth at some point,” Magnus points out.

At Acre Solutions, the load plan has been extended till 2028.

Statfjord A, one of Norway’s oldest oil fields in operation since 1979, was due to be decommissioned in 2022, but energy company Equinor decided in 2020 to extend its life to 2027.

Ditto for the other two installations of this hydrocarbon field, Statfjord B and C, more recent but extending to at least 2035.

A relief fueled by the remaining reserves, which are still said to be “substantial”, and the recent surge in the price per barrel undoubtedly had to further strengthen.

So should everything go away? Not in the opinion of some environmentalists.

According to the Norwegian branch of Friends of the Earth, the concrete floors of the first installations – later, metal floors were preferred – made for “beautiful” artificial coral reefs with their porosity and hardness.

“Anyone who has worked on the platform will tell you: there are a lot of big fish living nearby because there is no industrial fishing, and the fish can reach ten years old,” explains marine biologist Per-Erich Schulz, consultant. to the system.

Therefore, the NGO recommends leaving the concrete piers in place – removing the rest, which is too complicated to remove anyway – and establishing marine protected areas around them.

A landmark in history After decades of draining the depths of the oceans, the oil industry will make a modest contribution to their preservation.