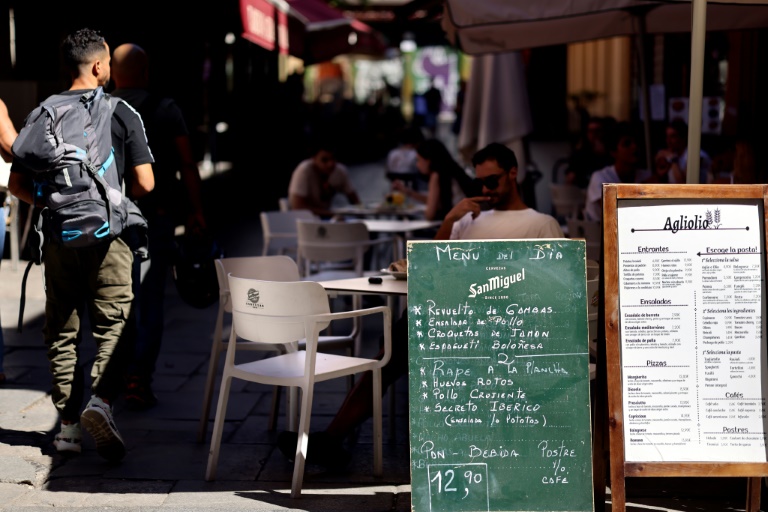 The “menu del dia” (menu of the day) is the essential lunch in Spain, derived from a formula enforced during the Franco era. But with inflation hovering around 10%, restaurants can no longer maintain its low prices and are looking for every little savings.

Includes starter, main course, dessert or coffee (or both), drink and bread: the menu is à la carte, costing an average of 12.8 euros according to recent figures from the Spanish Hospitality Organization, which represents the hotel and catering sector. In almost all Spanish restaurants.

Its price is a strong argument in a country where people eat a lot.

“Everybody chooses it,” says Sara Riballo, 30, sitting under an umbrella in the center of Madrid. “We eat several times a week, we often take the menu of the day, it’s the best in terms of price, fast, very varied,” confirms his colleague Estefania Hervas.

On average, four million “menu del dia” are served every day in this country of 47 million people, according to the Hotellerie d’Espagne.

This imperative descends directly from the “tourist menu” that dictator Franco’s minister Manuel Fraga imposed on all the country’s restaurants on August 1, 1964, to accompany a new mass tourism on Spain’s beaches.

According to the official journal of the time, it had to include “at least” one soup, one dish, one dessert, wine and a quarter of bread.

Still built in the same way today, it has become a kind of barometer of the Spanish economy, explains Emilio Gallego, general secretary of the Hotelleri de España. “It’s a very popular formula, served to millions of people every day and is constantly researched,” he says.

“Very concerned about the effects of inflation”, this professional body surveyed its members and between November 2021 and April 2022, three-quarters of them had already raised the price of this menu, while inflation was not yet at its peak. More than 10% have reached this summer.

For good reason: during the same period, oil (+42.5% olive oil and +96.3% other oils), milk, bread, meat, eggs, pasta but saw gas electricity for cooling rooms or stoves. Their prices are rising.

“Punished by the increase in the cost of energy, raw materials”, continues the Hôtellerie d’Espagne, saying that restaurants have no choice but to send this menu. 1 euro and often increases between 1.50 euro (+10% to 15%).

At the historic Cafe Gijón in the heart of Madrid, 250 menus are served daily for 15 euros.

But for manager Jose Manuel Escamilla, a price hike in the coming weeks will be inevitable. “Power explodes, credits explode. If this continues, we will not last,” he admits. The decision “will be difficult because it affects the customer, but without it the company cannot achieve its economic objective”.

Beyond menu pricing, restaurants are looking for every little savings to protect these menu margins.

Like this establishment in a chic district of Madrid, meat is now ordered only in blocks and whole fish, which are cut or prepared in the kitchen, so the cost will be lower, said an employee in charge of distribution.

Emilio Gallego thinks restaurants will adapt by generalizing other “formats” such as “semi-menus” or “distinctive dishes” such as the daily special in France.

“Instead of 3 or 4 starters, we now have 2,” explains waitress Laura Rubio for her part, “waiting to see what happens” at the “Valcam Dios” restaurant in the center of Madrid. It is necessary to raise the price of a menu that has remained the same for years.

Like other clients, 47-year-old screenwriter Helio Mira has a good heart against bad luck. “It’s not just the daily menus, but the cost of living in general is rising. What can we do there? We have to be patient,” he says in front of his menu for the day.