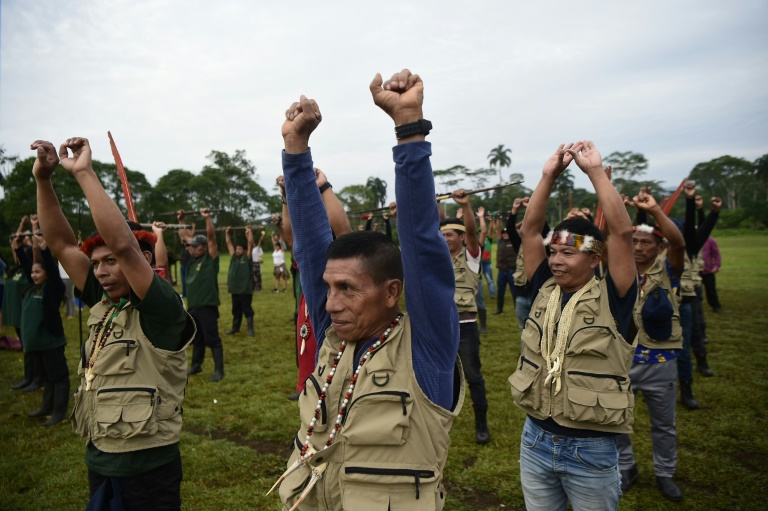 In the heart of the Ecuadorian Amazon, “Guard, Guard! And “Strength, Strength!” “. With painted faces and spears in hand, they come together to defend their territories against oil and mining exploitation and poaching.

The sun has yet to rise on the banks of the Agurico River in the Sinango community in northeastern Ecuador. They are about 300 men and women to meet the first meeting of the Native Guard this Sunday.

These volunteer teams have been patrolling the forest since dawn. They ensure that no poachers, miners or oil drillers enter the forest.

“The Guard is not a subversive group, it is not a paramilitary group as they (government officials) say, we are the protectors of our territory, protectors of life and land”, explains AFP Alexandra Narvaez.

With slanted eyes, brown skin and braided hair, Alexandra Narvaez belongs to the Cofan tribe. Together with another community leader, Alex Lucidante, they won the Goldman Environmental Prize for their fight against mining in the Sinango area.

But that day’s meeting didn’t just bring Gofan together. 12 tribes attended the ceremony. Program of the meeting: Refining their tactics for forest conservation.

The Kofan can be identified by their green shirts and the black paint they apply on their faces to represent boa-like animals. Chicoboys, on the other hand, wear feathered headdresses and paint their noses. Waurani women paint red around their eyes.

With their spears in their belts, the guards are actually more modern than they appear. They use self-installed GPS and cameras to detect intruders in the forest, Alexandra Narvaez. They also use drones to monitor foreign intrusions.

“We have no weapons. Our wooden spear is the only symbol of strength, power, struggle and memory of our ancestors,” he adds.

The natives have reason to worry. The communities involved believe that mining and Guillermo Lasso’s conservative government’s plan to double oil production threaten the integrity of their territories.

Amazonian tribes have also fought for years against repeated oil spills in the region. The latest disaster dates back to January, when the equivalent of 6,300 barrels of oil spilled into nature after a pipeline burst. A natural reserve and the Coco River is polluted.

“The threats are getting bigger every day,” says Alex Lucidant. It “leads us to ask ourselves (…) what will happen to our culture and our lives”. Of Ecuador’s 18 million people, more than a million consider themselves indigenous.

The mobilization of the tribal people goes beyond the boundaries of the forest. Native Guards took part in demonstrations against cost-of-living hikes in Kyoto in June. 6 people died and over 600 were injured.

Armed with tribal-made shields and nosegays covered with eucalyptus leaves to protect themselves from the smoke of tear gas shells, the Kofan were at the front line of the protest.

In the forest, they gather in a circle to stare at each other and welcome the newcomers. These will soon join existing patrols and form new groups to protect other parts of the forest.