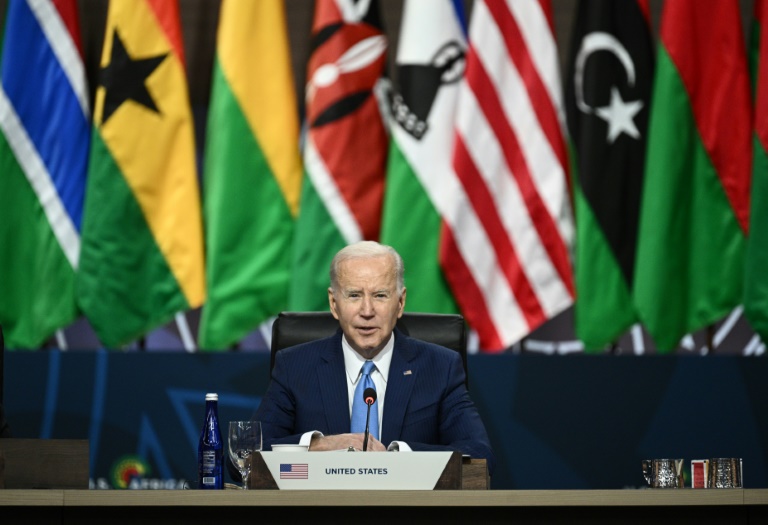 Joe Biden on Thursday called for a greater role for Africa on the international stage and pledged to promote good governance and democracy there, on the final day of a summit in Washington that will mark America’s return to the world.

The US president has also promised to visit sub-Saharan Africa early next year, after Barack Obama visited Kenya and Ethiopia in 2015.

He did not specify a date or the countries he wanted to visit, pointing out that some countries had “invited him” and replied: “Be careful what you ask. I can come” .

Former President Donald Trump has not made any trips to sub-Saharan Africa.

The US president spoke before his African counterparts on Wednesday and Thursday for support for maintaining peace and security, good governance or human rights in a continent where more than one country has been criticized in the region. US aid is intended to reflect this country’s renewed commitment to the continent.

In particular, he announced $2.5 billion in aid to combat food insecurity in Africa and concluded a “strategic partnership” with the African Union in the short and long term to ensure agricultural sustainability on the continent.

“Food security is essential for peace and prosperity,” he said. “Simply put, if a parent can’t feed their child, nothing else really matters.”

The issue of rising food prices, exacerbated by the war in Ukraine since February’s Russian invasion, dominated the summit’s work on Thursday afternoon.

In the morning, Mr. Biden announced $75 million to strengthen democratic institutions in Africa and $100 million in security assistance.

Before hosting African leaders for dinner on Wednesday evening, he received at the White House the leaders of six African countries whose elections next year will be closely watched by the United States.

– at the negotiating table –

“Africa must be at the table in every room where global challenges are discussed – and in all institutions,” he added, adding that the UN Bringing together the major economic powers of the Security Council and the G20. the world

An initiative was immediately welcomed by Senegalese President Macky Sall, who holds the rotating presidency of the African Union.

But the latter, in a rare contrarian note, called for the lifting of international sanctions against Zimbabwe and warned against a bill being considered by the US Congress that would impose sanctions on African countries dealing with Russia.

“This is the first time in international relations that an entire continent has been targeted in this way,” he said.

African leaders were generally content to host the summit – the last in this form was under Barack Obama in 2014 – even if the head of the AU Commission, Moussa Faki Mahamat, did not tolerate “national self-interest”. Africa’s Audible Voice”.

President Biden, a champion of multilateralism and proud of America’s return to the international stage after the Trump years, had already pleaded on Wednesday to build a broader partnership with Africa.

“We want to cooperate in all areas,” he said again Thursday, stressing that “the United States was fully with Africa for Africa.”

The Biden administration wants to free up $55 billion for Africa over the next three years in sectors as diverse as digital, infrastructure, health and energy transition.

While the US refuses to talk about competition with China on the African continent, it is trying to strengthen its presence there and emphasize its vision of sustainable development and democracy.