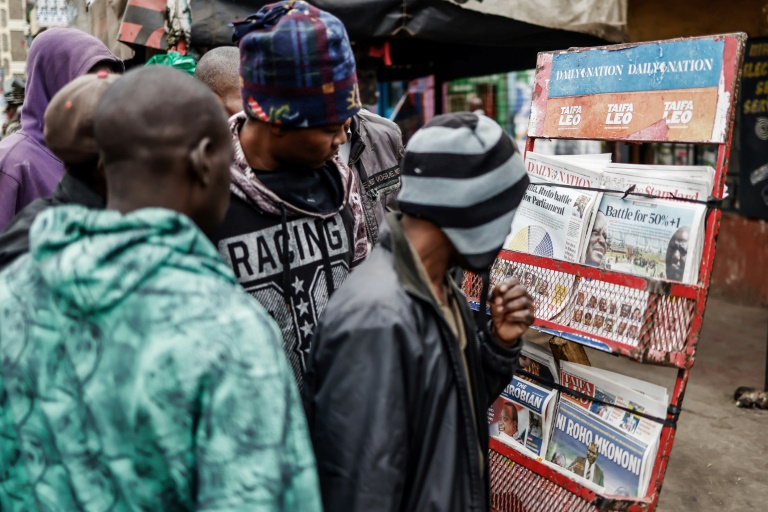 Kenya’s electoral commission admitted on Friday that the results of Kenya’s presidential election were ‘not as quick’ as expected, three days after polls closed, and the prospect fueled patience in the country, Africa’s economic powerhouse from the east.

Independent Electoral Commission (IEBC) chairman Wafula Chebukati said the delay was due to interference from presidential candidate parties: “We have observed that we are not moving as fast as we should.”

While international observers have praised the progress the IEBC has made this year, helping to ensure a peaceful vote on Tuesday, counting and collating the results is taking longer than expected.

The recession is fueling the anxiety of Kenyans, eager to resume a normal life and to know who will be their next president, Raila Odinga or William Rudo.

Five years ago, the official results fell three days after the polls.

The IEBC is under increasing pressure after being criticized for legally nullifying the August 2017 presidential election. It has until August 16 to announce the final results.

Election Commission Chief Executive Marjan Hussain Marjan on Friday denied that the commission’s computer systems and its results portal had been compromised.

“We want to assure the country that nothing like this happened,” he told reporters. “We assure the whole country that our systems are truly secure…the mechanisms we have are foolproof,” he said.

On Tuesday, 22.1 million Kenyans were called to the polls to elect a successor to Uhuru Kenyatta, president since 2013. Five elections were held simultaneously to elect members of parliament and local representatives.

At nearly 46,000 polling stations, political parties stationed their own observers, their eyes glued to the ballot boxes. Some are bombarding election agents with questions today, IEBC assures.

“Don’t slow down the process,” said Mr. Chebukati told them on Friday that otherwise “we cannot finish” within the seven days allowed by law.

Impatience to know the results is growing among the estimated 50 million Kenyans.

The country is in fact still dormant, with schools closed while the assembly of minutes continues at constituency, district and national levels in Nairobi.

The day after the election, Kenyan television began airing evolving and sometimes conflicting estimates of the results, based on their own tallies.

They confirmed the atmosphere of a fierce battle between two of the four presidential candidates: 77-year-old Raila Odinga, who has the support of President Kenyatta and his party, and 55-year-old William Ruto, who is leaving as deputy president.

However, these TV channels have stopped airing their results ratings, it was noted on Friday, without giving explanations.

A result in Kisumu (West) was applauded as the ratings “brought emotions to Yo-Yo”, commented Pastor Christopher Mesa. “We want to take more time, but to be clear.”

Zale Akini, a 65-year-old retired librarian, spoke Friday of the tension on the streets as life resumes.

Shops have been closed since Tuesday, declared a public holiday, and reopened, with street vendors once again unpacking their piles of vegetables or dried fish under umbrellas.

“We are a little worried. We pray that they will release (the results) soon,” a retiree who went to the street to buy cassava told AFP.

Voter turnout was just 65% on Tuesday, compared to 78% in the August 2017 elections, the Election Commission said.

All polls in Kenya since 2002 have been controversial, sometimes leading to bloody violence.

In 2007–2008, Raila Odinga’s challenge to the results led to inter-communal clashes that killed more than 1,100 people and displaced hundreds of thousands, the worst post-election violence since the country gained independence in 1963.