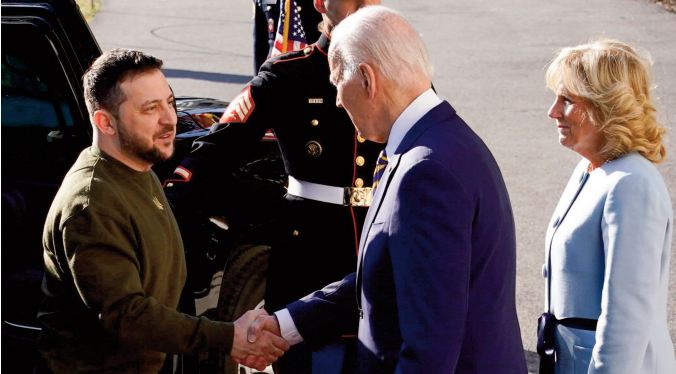 The Kremlin on Thursday condemned Ukrainian President Volodymyr Zelensky’s “unwillingness to listen to Russia” after his visit to the US, while Vladimir Putin said he wanted to end the conflict “quickly”.

Mr. On his way back to his country, Zelenskiy met Polish President Andrzej Duda in Poland before arriving in Ukraine a few hours later.

“We are coming back from Washington with good results. Something that can really help,” he said in a video shot in Poland, referring to the US Patriot missile system that Kiev has been asking for for months.
For his part, Russian President Vladimir Putin dismissed the benefits of this “old system” for Ukraine.

“Our adversaries consider it a defensive weapon. Well, we’ll keep that in mind. And there’s always an antidote,” he said.

“This is just a way to prolong the conflict, that’s all,” Putin said, though he said he wanted a quick end to the fighting in Ukraine.
“We will try to make sure it ends. The sooner the better, of course,” he said.

In Washington, US diplomat Anthony Blinken responded to the announcement by saying the Kremlin had not shown any “significant” desire to end the war.
“Basically today, Russia is not interested in (engaging in) meaningful diplomacy to end the war,” he said.

In Poland, Mr. During the meeting with Duda, President Zelensky said that he discussed with him the events of the past year and “discussed strategic plans for the future, bilateral relations and relations at the international level in 2023.”

On Wednesday, during his trip to Washington, his first trip abroad since the start of the Russian offensive in February, the Ukrainian president received a hero’s welcome, speaking with his colleague Joe Biden and delivering a speech to applause from members of the US House of Representatives.

“So far, we can note with regret that neither President Biden nor President Zelensky has said anything that could be considered a possible option to listen to Russia’s concerns,” Russian presidential spokesman Dmitry Peskov responded on Thursday.

According to him, during this visit, Mr. Zelensky had no “genuine calls for peace” or American “warnings.” Donbass, an area in eastern Ukraine under pro-government control. – Russian separatists.

“This shows that the United States continues its real and covert war with Russia to the last Ukraine,” the spokesman added.
On Wednesday, the day Volodymyr Zelensky visited the US, the Kremlin warned that further US arms deliveries to Ukraine would “worse” the conflict.

Mr. Zelensky meanwhile said Western aid to his country was “an investment in global security and democracy” and “not charity”.
In Rome, Italian Prime Minister Giorgia Meloni also said she wants to visit Ukraine in early 2023.

On the ground, Russia has suffered major setbacks in recent months.
In response, it has opted since October for massive bombing of Ukrainian infrastructure, depriving millions of people of electricity, water and heat in the middle of winter.

The cuts notably affected the capital, Kyiv, where the energy situation remained “difficult” on Thursday, according to Serguiï Popko, head of its military administration.

Russian Defense Minister Sergei Shoigu has traveled to inspect Russian positions in Ukraine, his ministry announced Thursday, without specifying the exact location or date of the trip.
He had already visited the “special operations” area a few days earlier, a sign of Moscow’s desire to keep closer control over its soldiers there.

Chief of Staff Valery Kurasimov confirmed that the aim of Russian forces in Ukraine is now to capture the entire industrial region of Donetsk. He said he saw the “stabilization” of the 815-kilometer-long front.

In the east, Dmitry Rogozin, the former boss of the Russian space agency Roscosmos, was wounded in a Ukrainian attack against a hotel in Donetsk, one of the strongholds of pro-Russian separatists.

According to Moscow, the strike, in which many were hit, sometimes fatally, was “probably” carried out using a French Caesar cannon, many of which were supplied to Ukraine.

In the Kherson region (south), according to the Russian occupation administration, the head of a Ukrainian region under Russian control was also killed in a bomb attack on Thursday.