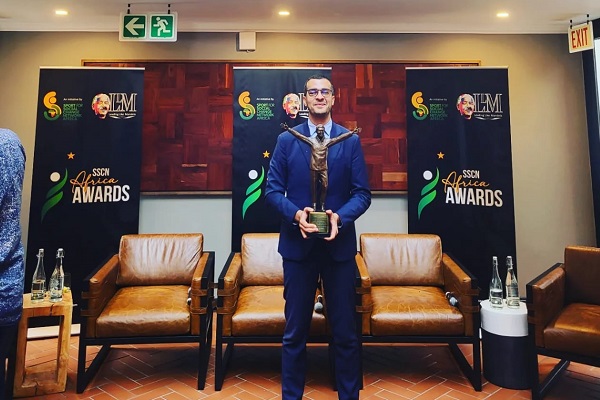 At a ceremony organized at the SABC Radio Park in Johannesburg, in the presence of Allan Williams, Director of Sports Network for Social Change (SSCN) and family members, the President of Tibu Africa, Mohamed Amin Zariat, was presented with the Best NGO Award. Former South African President Nelson Mandela Madiba.

The Sports for Social Change Network has officially launched the first SSCN Africa Awards under the theme “Leading Like Mandela” by presenting various awards to honor the many heroes and social actors across the continent, encouraging young people to unleash their potential through sport.

Thibu Africa operates from a perspective that aligns with Nelson Mandela’s famous maxim: “Sport has the power to change the world, to inspire and unite people like few other ways. Do it”.

Through several projects with a strong social impact, the Moroccan NGO contributes to the professional integration of youth, the socio-economic integration of sub-Saharan migrant youth and their return to Morocco, the emancipation and empowerment of urban and young women. Empowering women in rural, working-class neighborhoods and engaging under-mobilized youth through the power of sport.

The main message delivered during this 1st edition of the SSCN Africa Awards was to unite the current actors of change who are aware of social issues and decide to work hard to promote programs and projects through sports for the benefit of African youth.

Tibu Africa offers wide national coverage in over 25 cities and 12 regions of the Kingdom and 6 African capitals. It aims to become the engine of sport for Africa’s growth by 2030.