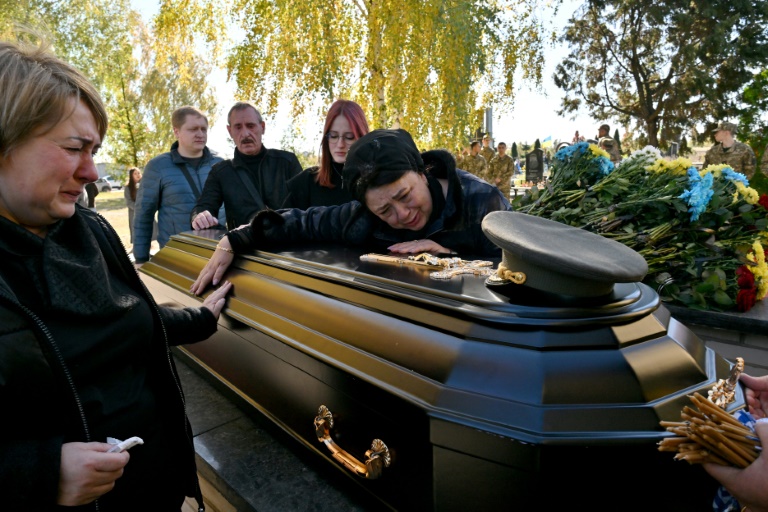 Near Kiev, the victim’s grave was discovered six months after the Russians left

As missiles hit Kiev again, Tetyana Telezhenko buried her son, who was tortured and killed by the Russian military in March, a city in the Ukrainian capital that has become a symbol of Russian atrocities.

A few weeks ago, 44-year-old Oleksiï was found in a field six months after he disappeared during the first Russian attacks on the outskirts of Kyiv.

However, the mother has not seen her son’s body since then. To protect her psychologically, her granddaughter banned her.

“She didn’t want me to see the video of her interrogation” by the Russians, she said, before adding: “She told me I wouldn’t have recognized him”.

In recent days, Russians have launched massive strikes in several Ukrainian cities, including the capital Kiev, in retaliation for the partial destruction of Russia’s Crimean bridge.

Oleksiy was among the fighters who fought back the invaders for weeks last March.

United Nations investigators said in late September that “war crimes” were committed by the Russian military during their occupation of the suburbs of Kew in March. The examples of Bautza and Irbain are still fresh in everyone’s mind.

According to Tetiana, her son may have been interrogated by the Russians before the war as an instructor at the academy of the Ukrainian intelligence services, the SBU.

At the time of his arrest, he joined a security unit and his relatives found him.

Although his body was discovered several days ago, his mother did not know the exact cause of his death. Only DNA testing could identify him, his body so badly decomposed.

“That must have been so hard on him,” she whispers. Before adding: “He never killed anyone in his life”.

The results of the UN international inquiry helped some residents of the area to close the dark chapter of the first weeks of the war.

The suburbs of Kew are actually rebuilding, and many families who fled in the first days of the fighting have now returned.

But a shift in strategy by Moscow’s troops in recent days, poised to strike again in all four corners of Ukrainian territory, has brought the reality of war back to Kyiv.

The city’s power grid is still up and cars throng the streets at lunchtime. But some stores have re-installed guards on the windows to prevent shards of glass from falling in the event of an explosion. Like a feeling of déjà vu.

At the Boutcha cemetery, Andriï Tchernyak, rector of the SBU Academy where Oleksiï worked, assures: “We are very grateful for the help of our international partners”. “But everyone should understand that this is not a fight for Ukraine. This is a fight for democracy and peace,” he said.

Not far away, Tetiana says she feels only hatred and pain.

Before the war, his life was closely connected with his Russian friends living on the other side of the border. She speaks Russian on a daily basis.

But Russian President Vladimir Putin’s decision to invade his neighbor wiped it all out with a backlash.

If the Kremlin wanted to win the hearts of Ukrainians by sending its troops, it had the opposite effect.

“I have a lot of friends in Russia. But now I don’t know if I should consider them friends,” he says a few minutes after his son’s funeral.

“They keep writing to me: + We are not responsible for what is happening +”. But I can’t get used to it. If they support this regime, I hate them.

See also  Sino-African Summit in Tucker: An Example of Sino-African Cooperation for a New Type of International Relations