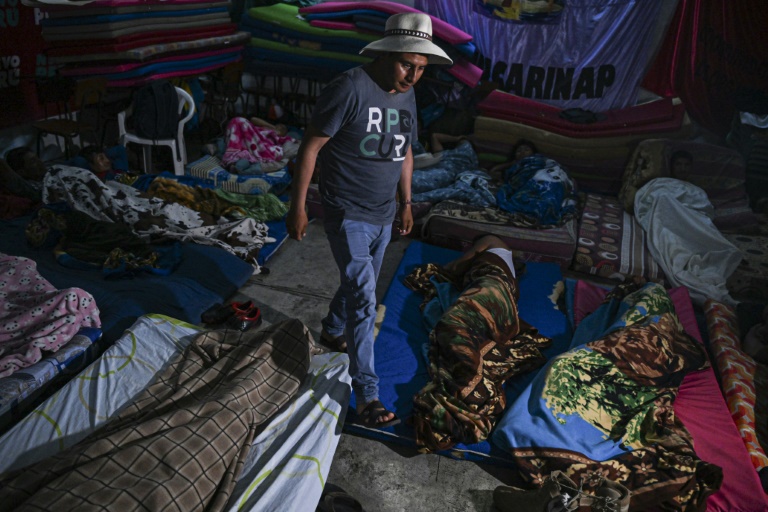 Peru: “Forgotten” mattresses and cocoa leaves are shared before demonstrations in Lima

Mattresses on the cement floor, a crowded common room and hallways, a line for breakfast… Dozens of farmers of Amerindian descent, who came from the Andes to demonstrate against Peruvian President Tina Polwarte, woke up Wednesday at the Left Campus. -The wing party hosting them.

“We come from Chumbivilcas (one of the Cuzco provinces) to defend our rights. To make our voices heard. We have been completely forgotten,” says Edwin Candori, a 43-year-old farmer, wearing a traditional hat and a red and black scarf.

He looks tired. Like him, hundreds, if not thousands, of protesters left their town or village to join Lima in a massive rally in the capital on Thursday. Objective: “Take Lima”.

At least 42 people have already died in protests that erupted after the December 7 ouster and arrest of leftist President Pedro Castillo, accused of plotting a coup attempt to dissolve the parliament that was preparing to oust him from power. .

Braving an extended state of emergency on Saturday in strategic locations such as Lima, protesters hope to be better heard in the capital after weeks of mobilizing in their regions, particularly in the south, the heartlands of the opposition.

They are demanding that the president step down, dissolve parliament and hold new elections with a constituent assembly.

However, despite mutual announcements, it is impossible to know the extent of this mobilization and to know how many people have arrived or are going to Lima.

Edwin Candori’s trip took 24 hours from Cuzco (south). Ayacucho, Cajamarca, Puno, Andahuaylas or other farmers travel by trucks, buses or shared cars. Some come to Lima for the first time in their lives.

Corridors of buses are overflowing with food that has been served for days. The demonstrators carried only a simple bag with some clothes. We chew cocoa leaves to relieve hunger and fatigue.

“We want Tina Polwart to resign. We don’t feel represented by her,” said Jesus Gomez, dressed as Edwin Condori. “We came to occupy Lima, we will paralyze Lima to listen,” says the potato, corn and wheat farmer.

On Wednesday mornings, a group of four women prepare large pots of “aguatido,” a soup made from chicken, vegetables, and rice seasoned with cilantro.

With discipline, villagers line up to receive the soup served in small bowls. When finished, everyone washes their plate and spoon in a small sink.

“We are completely forgotten,” says Nelita Aguirre, 30, a coca grower. “We don’t have good schools or health services. Power forgets us.”

She gets angry when she talks about the authorities’ accusations that the funds are raised by drug traffickers: “We’re not funded by traffickers, we’re not terrorists, we’re farmers!”

“We have come to make people realize that we farmers have courage. Tomorrow, if we take Lima, they (politicians) will put themselves in our place and understand our hardships,” he said.

Before breakfast, the villagers performed a ritual to honor Mother Earth, Pachamama. Gathering, they pose in front of some photographs of the victims of the demonstrations with soil, corn grains, water, fruits and flowers and recite some words of tribute to the dead.

“Tomorrow is a day of protest for us,” promises Aurora Coronado, one of the demonstrators from the area of ​​June. “The protest will last until the usurper resigns.”