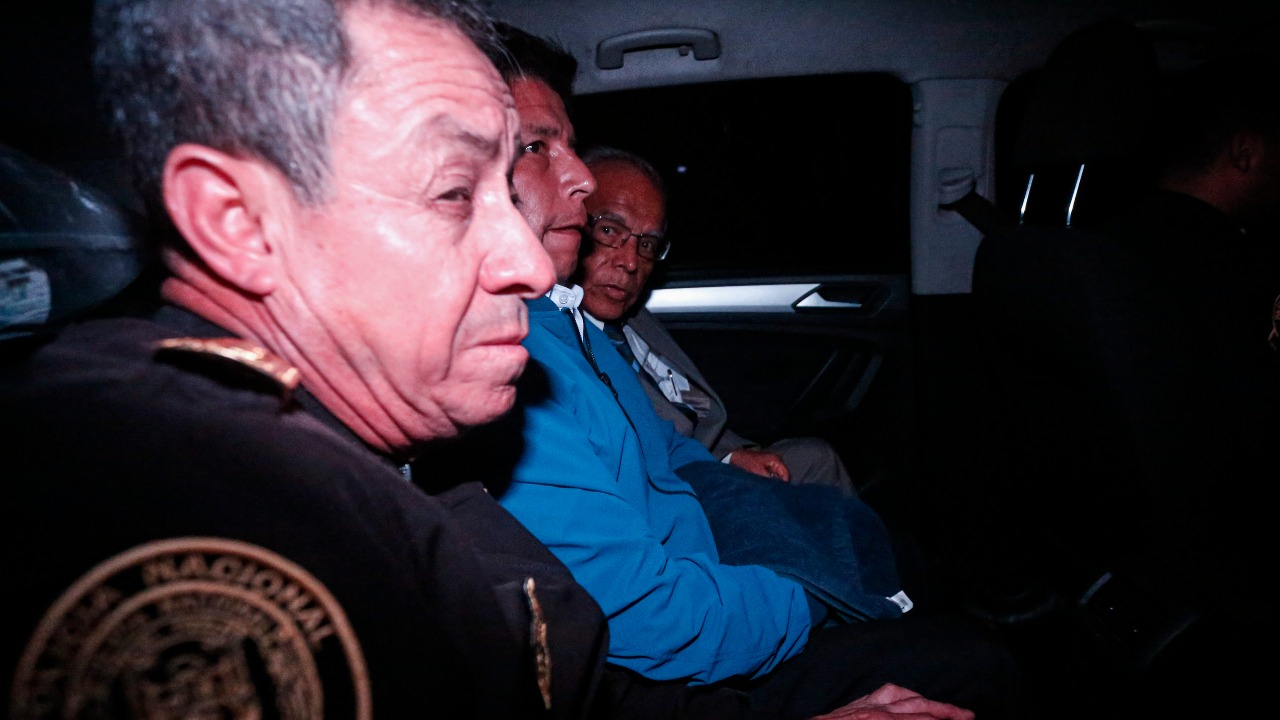 VideoPeruvian President Pedro Castillo was detained at a police station in Lima this Thursday, December 7, 2022, a day after his impeachment and a day full of twists and turns. Latin American countries are used to political crises.

The third impeachment procedure saw leftist President Pedro Castillo try his luck by announcing the dissolution of the parliament that tried to topple him, and was immediately qualified as a “coup d’état” by many figures.

Pedro Castillo, 53, who will take power in July 2021, was “arrested,” prosecutor Marita Barretto announced. Footage showed the ousted head of state sitting in a chair, surrounded by prosecutors and police.

According to Peruvian media, Pedro Castillo was transferred by helicopter to a police special forces base in Lima, where he is expected to be held for a maximum of 15 days. The prosecution also raided the Presidential Palace on Wednesday evening.

A judicial source told AFP that a trial for “rebellion” had been opened against Pedro Castillo, who ruled the country for only seventeen months.

In addition to six other investigations into corruption or influence peddling targeting him, members of his family and his political entourage are also charged with crimes.

His impeachment on grounds of “moral incapacity”, televised live, was approved by 101 of the 130 members of Parliament, including 80 in the opposition.

In a last-minute attempt to save his position, the former president announced the dissolution of parliament hours before parliament was due to meet to decide his fate.

He also announced the establishment of a “Government of Extraordinary Emergency” and wanted to “convene a new Congress with powers as soon as possible”. A maneuver ignored by Parliament and widely condemned by the political class.

According to the police, after his failed attempt to disperse, Pedro Castillo intended to seek asylum at the Mexican consulate, but he was arrested earlier.

“Today there was a coup d’état in the purest style of the XXe century”, the president of the Constitutional Court, Francisco Morales, believed that “no one obeys a usurping government”.

Independent political analyst Augusto Alvarez told AFP that Pedro Castillo “has violated Article 117 of the Peruvian Constitution and is (illegal)”. It is a self-conspiracy”.

During an investiture ceremony in front of parliament where the president donned the mantle to become Peru’s first female president, Tina Poluarte reiterated that the coup attempt by Pedro Castillo did not resonate with democratic institutions. or in the streets”.

Until the end of Pedro Castillo’s mandate, “from this moment” and until “July 2026,” I consider (authority) according to Peru’s constitution, said the 60-year-old lawyer, who belongs to the same party of Marxist inspiration. (peru libre) like him.

“We are tired of this corrupt government, this government that has been stealing from us since day one,” 51-year-old worker Johanna Salazar told AFP.

Others came to the defense of Pedro Castillo, calling for “respect for the people’s vote”, such as Sissi, a 50-year-old municipal employee, “since the arrival of the president, they don’t believe they have humiliated him. They don’t accept a president from the provinces”, about the former teacher in the countryside for 24 years, new to politics.

The United States immediately announced that it no longer considered Pedro Castillo as the current president of the country. “We categorically reject any unconstitutional (…) act, any act that undermines democracy”, State Department spokesman Ned Price said.

Brazilian President-elect Luiz Inacio Lula da Silva said it was “always regrettable that such a fate befalls a democratically elected president”, but he was happy that “everything was carried out within the constitutional framework”.

The Spanish government and Organization of American States (OAS) Secretary-General Luis Almagro welcomed the “restoration of democratic normalcy” and condemned the “breakdown of constitutional order” in Pedro Castillo’s efforts in Madrid.

He was accused of repeated ministerial crises and the formation of four governments in eight months, an unprecedented event in Peru.