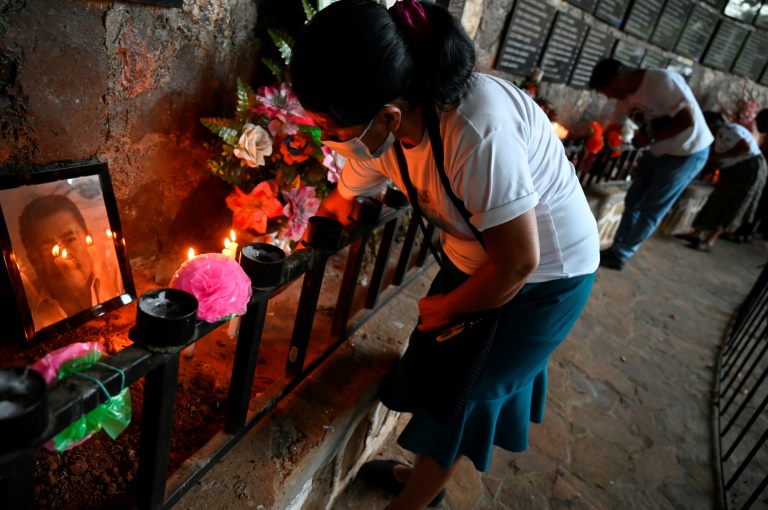 Candles, Silence and Tears: About 300 people paid their respects on Saturday in El Mosot on Saturday, 40 years after the thousand people – half of them children – who were massacred by the military in this village in El Salvador in 1981. War.

Relatives of the victims marched to the monument “El Mosud, no more” in the main square, 200 km northeast of the village, with flowers, portraits of the missing, lanterns in their hands and lit candles. The capital, San Salvador. A minute of silence was observed before church bells rang in memory of the massacred people.

“Forty years have passed, but it’s as it happened yesterday, our wounds are alive, our hope is in justice,” Dorilla Marquez, 65, who lost her parents, told AFP. One pregnant sister, six nieces and nephews and five brothers- mother-in-law and sisters.

Saturnino Argueta Claros, 71, who lost his mother, siblings, nephews, nephews and nephew, said: “We are not looking for money, we need more justice.”

Between December 9 and 13, 1981, in the midst of the Civil War, soldiers from the American-trained Attock Army battalion were now disbanded, setting houses on fire and killing El Mozod residents in the north. – A member of the Morazan (Eastern) Division, suspected of collaborating with leftist guerrillas.

According to witnesses, all were murdered. The women were raped first. The boys were thrown into the air and shot by the military. The Salvador government established in 2017 that at least 988 people, including 558 children, had been killed in El Mosud and neighboring villages.

In 1993, a UN. The commission established the guilt of a group of murderers. In 2012, the Inter-American Human Rights Court ordered the government of Salvador to pay compensation.

But nothing helped: those responsible were protected by the amnesty law of 1993. It was actually declared unconstitutional in 2016, but the practice that opened later has so far failed.

The United States, which financially participated in the civil war, announced on Saturday that it had handed over secret documents about the massacre to the Salvador court.

“Yesterday (Friday) we submitted the classified documents of the US government requested by the trial court and will provide more in the future,” said Diplomat Brendan O’Brien in Spanish. Responsible for the talks at the US Embassy in San Salvador, during the commemoration. Ceremony at El Mozote Square.

The assassination was denied because the then military-civilian government, led by the now-defunct Christian Democrat Jose Napoleon Duarte, and the administration of US President Ronald Reagan provided ‘one million dollars a day’ in aid. Civil war under the ruling military regime in El Salvador.