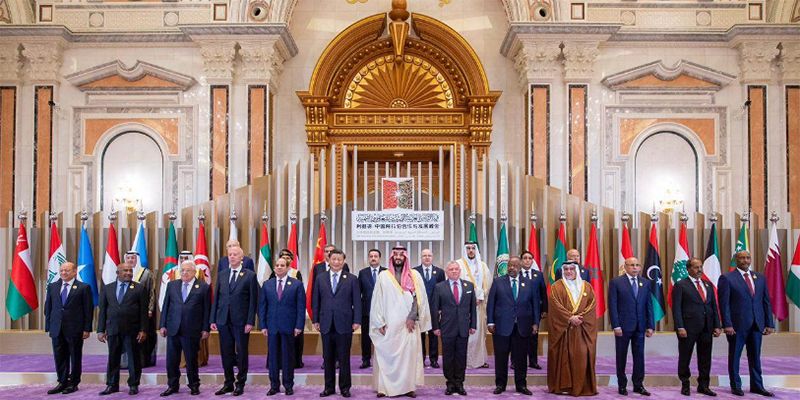 The Sino-Arab summit was held in Saudi Arabia last Friday. This meeting with Arab countries represents a new milestone in strengthening the strategic partnership with the Middle Kingdom..

At a time when the world is facing all sorts of economic, social and climate risks, new poles of economic alliances are emerging or at least being strengthened to generate more growth and support growth momentum.

Committed to true international diplomacy, China, this economic giant, has multiplied its activities in recent years in the direction of cooperation and bilateral relations in the context of win-win economic cooperation.

After the China-Africa Summit, it is the turn of the 1st Sino-Arab Summit.

In fact, this first Sino-Arab summit is an important step in the partnership process between the Arab countries and China, with the aim of strengthening bilateral relations in all fields, opportunities for economic cooperation and development. Moreover, the forum is also a place to analyze ways to implement communication bridges to serve the mutual interests of both parties in various fields like fight against poverty, food security, green development, climate change, trade, industry, technology etc. Development and Sustainable Development Goals.

Broadly, it is an important means to promote the exchange of expertise between the Arab countries and China and to address current global challenges at the political, economic and cultural levels.

Today, in this mixed geostrategic context, holding the Sino-Arab Cooperation and Development Summit in Saudi Arabia reflects the interest of Arab and Chinese leaders in the development of aspects of cooperation, the adaptation of Arab countries’ strategic orientations with China, the world’s second largest economy, the creation of mechanisms for a common vision and understanding, and quality Initiating and supporting initiatives.

Chaired by Moroccan Prime Minister Aziz Akannouch, His Majesty’s speech resonated with this high-level meeting. The Sovereign pointed out that the Kingdom of Morocco “reaffirms its full readiness to effectively contribute to raising the level of this strategic partnership in all areas, by demonstrating an unwavering commitment to fair and just Arab causes, and by demonstrating a more equitable and balanced world.” The political and economic order is formed with full respect for the sovereignty and territorial integrity of States and the principle of non-interference in their internal affairs”.

Sino-Arab relations, which are diversifying and growing at the political, economic, commercial, cultural and human levels, “hid considerable potential and should be harnessed to the best advantage. For effective economic growth and greater scientific and technological progress, the Arab world, especially the implementation of development projects, infrastructure and logistics Thanks to equipment strengthening, human development and transfer of technologies.

Regarding Sino-Moroccan relations, the Sovereign expressed his deep satisfaction for the strong historical friendship that binds the two countries, praised their fruitful cooperation in various fields, and praised constructive coordination and consultation on various issues of common interest.

Also Read | Morocco and China want to increase their trade

Welcoming the firm and sincere desire shared by both countries to improve these relations, the King reiterated the Kingdom of Morocco’s adherence to the One China Policy as the basis of relations between the two friendly countries. “Our support for initiatives launched by China, such as the Group of Friends of the Global Development Initiative, reflects the level of close cooperation between the two friendly countries,” the sovereign continued, adding that Morocco also wants to advance. The “Strategic Partnership” was concluded between the two countries in May 2016 and endorsed by the “Memorandum of Understanding on the Belt and Road Initiative”.

See also  The oceans saved us, and now it is our turn

As a reminder, bilateral trade has increased by 50% in the last five years, from USD 4 billion (€3.5 billion) in 2016 to USD 6 billion in 2021. More than 80 Chinese investment projects are underway. Development in Morocco. China’s direct investment reached 380 million dollars.