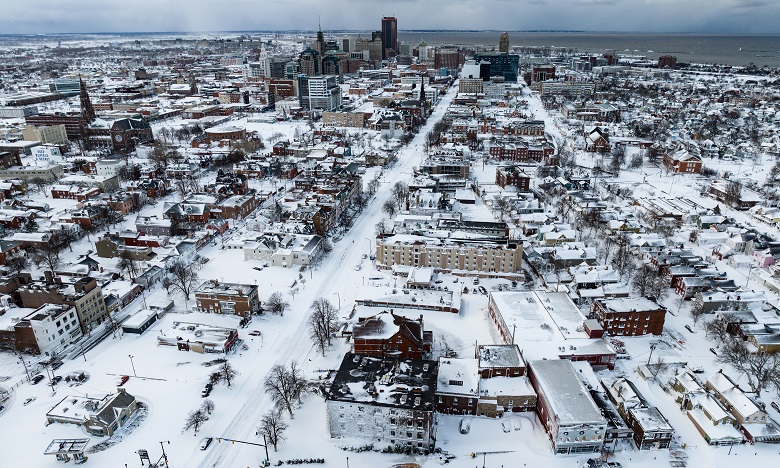 The bitter cold that has battered the United States for days will begin to ease in the eastern and midwestern parts of the country on Tuesday, the “blizzard of the century” that has killed at least 49 people, including 27 in a single county in New York. York State, causing traffic chaos.

“It’s very, very early to say it’s over,” New York Governor Cathy Hochul warned, though she still expected up to 30cm of snow. “This is clearly the blizzard of the century,” he added during a news conference from his hometown of Buffalo.

Although the intensity of the storm was not as recent“It’s always dangerous to be outside,” she warned.

“Temperatures are expected to drop across the Midwest and East over the next few days,” the US Weather Service (NWS) confirmed in its first bulletin on Tuesday, warning of “hazardous traffic conditions locally”.

A total of more than 15,000 flights have been canceled, including nearly 4,000 on Monday, according to monitoring site Flightaware.com.

Western New York, accustomed to cold and storms, has been battered by polar temperatures since last week, buried under meters of snow.

In Erie County, which includes Buffalo, the death toll rose to 27 on Monday, county official Mark Polancarz said. Some were found dead in their cars or outside, and others died of heart attacks while trying to clear snow while temperatures were still freezing, he added.

He said he expects more victims to be found gradually.

The total number of deaths confirmed by authorities in nine US states is at least 49. In Ohio, nine people were killed in road crashes related to the bad weather, the Ohio State Highway Patrol confirmed to AFP.

“My heart goes out to those who have lost a loved one,” US President Joe Biden tweeted on Monday, noting that he spoke by phone with New York’s governor and pledged to provide needed federal resources.

He said they join first lady Jill Biden in praying for those who lost loved ones in the storm, according to a White House statement.

According to the same source, Joe Biden has also approved the declaration of a state of emergency in New York state.

Rescue teams pulled hundreds of people out of snow-covered cars and homes without power, but officials said others may still be trapped in the snow.

“What we’re doing today is getting people to doctors, nurses and hospitals,” County Sheriff John Garcia told CNN on Monday. “The winds are dying and the roads are finally starting to pass.”

During the height of the storm, rescuers were unable to reach people in distress, such as those stranded in their cars or homes without power.

See also  Kyiv will capture half of Cyvrodonetsk, with Saporishia Oblast 60% controlled by Russia

Mark Polancarz said Monday morning that more than 13,000 homes had been restored to power in the past 24 hours, but he warned that some may not be connected to the network until Tuesday.

Buffalo International Airport remains closed until Tuesday and a traffic ban is in effect in the city and much of Erie County.