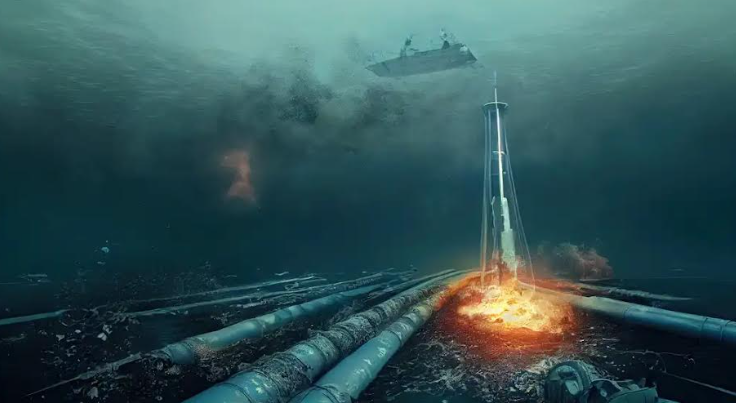 The Nord Stream 2 gas pipeline connecting Russia to Germany is no longer leaking under the Baltic Sea, a spokesman told Agence France-Presse on Saturday. “The water pressure has more or less closed the pipeline, so the gas inside cannot escape,” Nord Stream 2 spokesman Ulrich Lissek said.

“The conclusion is that there is still gas in the pipeline,” he added, unable to specify the amount.

The Nord Stream 1 and 2 infrastructure, built to transport Russian gas to Europe, was damaged by an underwater explosion on a Danish island in the Baltic Sea on Monday, causing extensive seepage.

Information on the status of the Nord Stream 1 gas pipeline leak was not immediately available.

The subject of geopolitical deadlocks in recent months, two pipelines operated by a consortium dependent on Russian giant Gazprom have been out of action due to the effects of the war in Ukraine. But both were full of gas.

On Friday evening, the Swedish Coast Guard announced that leaks in Nord Stream 2 showed major signs of weakening due to exhaustion of gas in the pipelines.

The diameter of the surface bubble caused by the spill, located in the Swedish exclusive economic zone, was now 20 meters wide, ten times smaller than it had been initially. The leak in Nord Stream 1, which was more powerful, began to weaken by the end of the day on Friday, causing a sea to boil up to 600 meters in diameter, compared to 900 to 1000 at the start.

In a letter to the UN Security Council on Friday, Danish and Swedish officials estimated that the leaks should stop by Sunday, with tens of thousands of tonnes of gas in pipelines exhausted.

“All available information indicates that the explosions were the result of a deliberate act,” Sweden and Denmark wrote, without identifying the country responsible. The origin of the explosions remains a mystery, although Moscow and Washington have denied any responsibility.

During the leaks from the Nord Stream 1 and 2 gas pipelines, the release of the powerful greenhouse gas methane into the atmosphere caused concern among scientists, whose first analysis data was not reassuring.

Fossil gas – mostly methane (CH4) – has been leaking from the Nord Stream 1 and 2 undersea gas pipelines for days, and a Swedish Coast Guard vessel has reported gas rising to the surface, worrying scientists. Because methane is a potent greenhouse gas.

But the actual impact the accident will have on our climate is difficult to assess. Crucially, no one knows how much methane the leaks are releasing into the atmosphere. Although full of speculation.

Based on data provided by Nord Stream AG, the operator of the gas pipelines — which says it has closed valves in hopes of containing the leak over time — some estimate that 100,000 to 120,000 tons of CH4 could escape from Nord Stream 1 alone. Equivalent to around 5% of the European energy sector’s methane emissions in 2020. The Nord Stream 2 pipeline has a capacity of 200,000 tonnes, and leaks from this pipeline are equivalent to 10% of the annual emissions of a country such as the United Kingdom. .

To get a better idea of ​​the scale of the disaster, scientists analyzed satellite images returned by Landsat 8. They clearly show the effect of leaks in Nord Stream 1 and 2. And a methane pool bubbling about 700 x 520 meters above the surface of the Baltic Sea. There is reason to fear that a sea floor in the Gulf of Mexico will be released more than a year ago when it was found to be more significant. In 17 days, 40,000 tons of methane were released into the atmosphere. For emissions estimated at about 3% of Mexico’s annual emissions.

Remember that methane’s effect on global warming is much larger in the short term than carbon dioxide (CO2). Although CH4 only stays in our atmosphere for about 10 years, it is estimated that over an average of 100 years, its warming power is 30 times that of CO2. We understand the potential problem these massive spills can cause.