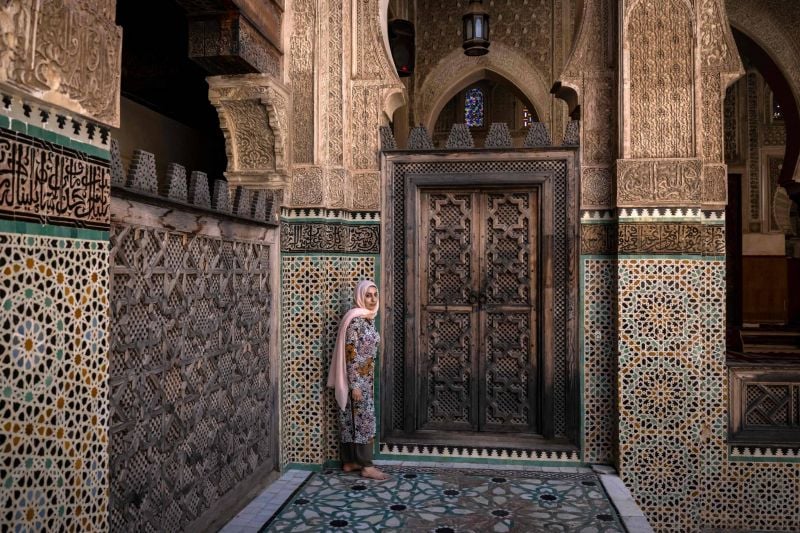 Mouad Souief is very proud to live in Bou Inania medersa, a recently renovated Koranic school in the heart of the medieval old city of Fez, the former capital of the Kingdom of Morocco.

The 25-year-old student feels he is the “heir of the precious history” of this medrza, founded in the 14th century, which has been rehabilitated since 2017 and has returned to Islam’s centuries-old tradition of the “golden mean”.

Bou Inania (1329-1358), named after a sultan of the Marinid dynasty, is the most famous madrasah in Fez, a depository of Arab-Andalusian civilization, where students can stay and study. Moud occupies one of the school’s 40 student rooms within the walls of the prestigious Al-Qaraween University.

According to some historians, the world’s oldest – built in 859, under the Idrisid dynasty – it houses five other medrzahs that have recently been restored or threatened with destruction as part of a program to preserve Fez’s historic sites. Students share this heritage with tourists who discover open patios, fountains and colorful mosaic walls. The site bears witness to the “golden age” of Fez, which became the capital of a kingdom again under the Merinid dynasty, which ruled from the 13th to the 15th centuries, occasionally controlling other parts of the Maghreb and the Iberian Peninsula. Marrakesh disappeared for three centuries.

A place to learn

Bou Inania medersa is located near Bab Boujloud, one of the gates of the old city. It is one of the first stages of a tourist circuit, which also includes two famous schools, Serratine and Attarine, which have also been restored. “Spiritual and authentic! That’s what tourists in Fez often tell me,” guide Saba Alaou told AFP, introducing two Spanish tourists to Bou Inania. Quranic verses and Arabic poetry painted in jelliges on Moroccan tiles attract visitors. “We can read a verse that speaks in the name of the school: + I am the place of knowledge, welcome +”, explains Laj Moussa Awni, professor of Islamic history and archeology at the University of Fez.

See also  This week, we're going to the museum!

“These schools were affiliated with the larger Al-Qaraween University,” said Mr. Awni recalls. “Besides Islamic science and Arabic literature, mathematics, medicine, mechanics and music were studied there.” As you leave the Boa Inania mederza, at the end of an alley lined with handicraft shops, is the Mosque of Al-Quaraoui, which predates the development of Fez in the 9th century and is inseparable from the university.

It was the time when the Muslim empires of Fez, Marrakech, Tlemcen and Oran (Algeria), Kairouan (Tunisia) and Andalusia shone. The university preserves traces of scholars and philosophers in its library, founded in the 14th century and containing some 4,000 manuscripts, “one of the oldest in the Islamic world,” notes its archivist Abdelfattah Buchchouf.

The quiet of the reading room – expanded by King Mohammed V in the 20th century – contrasts with the incessant hubbub of the district’s artisans. Among its treasures, preserved in a special room, is a 12th-century medical manuscript by Ibn Tofayl, or the “Book of Examples”, the “Kitab al-Ibar” by the Tunisian philosopher Ibn Khaldun (1332-1406). He himself donated to the library. Modernized, it is equipped with a laboratory “to restore damaged parts and extend the life of manuscripts,” explains its director, Sabah El Bassey.

The rehabilitation of Fez’s madrasahs is part of Morocco’s efforts to “centralize” religious education in response to radical Islamist currents.

Therefore, parallel to the restructuring, a new five-year course was launched at Al-Qaraween University, leading to a diploma for advanced studies in Islamic sciences. It is open to high school graduates after a competitive and Quranic memorization test. “We study various Islamic sciences, comparative religions, French, English and Hebrew, everything that allows us to open ourselves to other cultures,” explains student Maud in his small room, which he calls his home. “We must be an example of tolerant Islam and be at the level of the great scholars who have passed through here,” he pleads.

Mouad Souief is very proud to live in Bou Inania medersa, a recently renovated Koranic school in the heart of the medieval old city of Fez, the former capital of the Kingdom of Morocco. The 25-year-old student feels that he is the “heir to the precious history” of this madrasah, founded in the 14th century, which has been undergoing rehabilitation since 2017, reviving the centuries-old Islamic tradition.