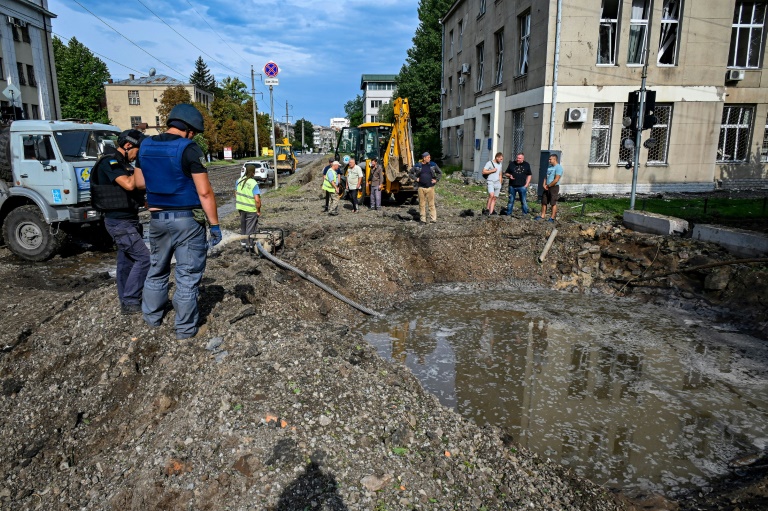 The three will discuss a recent deal to export Ukrainian grain but “a political solution to this conflict is needed,” UN spokesman Stephane Dujarric said. “I have no doubt that the nuclear power plant (Zaporitsia) and other issues will also be discussed.”

In his traditional evening address, Mr. Guterres “has already arrived in Ukraine. We will work together to achieve the results that Ukraine needs.”

General Secretary Mr. He is also scheduled to meet bilaterally with Zelensky. He planned to travel on Friday to Odesa, one of the three ports used under the grain export deal, to visit the Joint Coordination Center (JCC), which oversees the deal, in Turkey.

According to the United Nations, between August 1 and 15, 21 bulk carriers were allowed to sail, carrying a total of 563,317 tons of agricultural raw materials, including 451,481 tons of corn.

But the first humanitarian ship chartered by the UN, carrying 23,000 tonnes of wheat, left Ukraine on Tuesday for Ethiopia as part of a UN-brokered and Turkish-brokered deal in July.

Ukraine and Russia are among the world’s biggest grain exporters, and prices have risen since the Russian invasion on February 24.

The Ukrainian president continued his full mobilization on the diplomatic front.

“Diplomacy for the benefit of our country has been very active in recent days,” noted Volodymyr Zelensky on Wednesday evening as he held a ceremony during the day to welcome the new ambassadors of Spain, Belgium, Kyrgyzstan and Romania.

He seeks financial and material aid for his country, and demands tougher sanctions against Moscow.

On the ground, the fighting continues and is claiming new civilian casualties, such as Kharkiv, Ukraine’s second city, where a missile hit a three-story residential building during a Russian bombardment on Wednesday, according to the country’s officials, causing “powerful fire.”

“At this point, seven people have died and seventeen have been injured,” said Kharkiv Mayor Igor Derekov, recalling the previous toll of six dead and sixteen injured.

Kharkiv, which is located about forty kilometers from the Russian border, is constantly shelled by the Russian army, but has never been able to capture it. Officials said hundreds of civilians were killed in the area.

The situation remains tense around the Zaporizhia nuclear power plant, Europe’s largest, which has been occupied by the Russian military since early March and has been repeatedly targeted by bombings. Moscow and Kiev blamed each other for the bombings.

Strikes once landed near a radioactive storage building, and another time a nuclear reactor shut down automatically.

Ukraine’s interior minister warned Wednesday that Ukraine must prepare for “all scenarios.”

See also  12 soldiers and "dozens of terrorists" were killed - Barlamane

“No one could have predicted that Russian troops were going to use tanks to fire at the nuclear reactors,” Denis Monastyrskyi charged during a trip to the city of Zaporizhia, located fifty kilometers from the installation as the crow flies.

“We must prepare for all possible scenarios,” he warned, accusing Russia of being a “terrorist state (…) until Russia takes control of the Zaporizhia nuclear power plant, there are great risks.”

The occupation of the site by Russian soldiers “poses a serious threat to its security and increases the risks of an accident or nuclear accident (…) It is urgent to authorize the IAEA’s inspection and withdraw all Russian forces,” Mr. Stoltenberg said during a press conference in Belgium.

Ukrainian public operator Energoatom on Tuesday condemned an “unprecedented” Russian cyber attack against its site, although it noted that its operations were not affected.