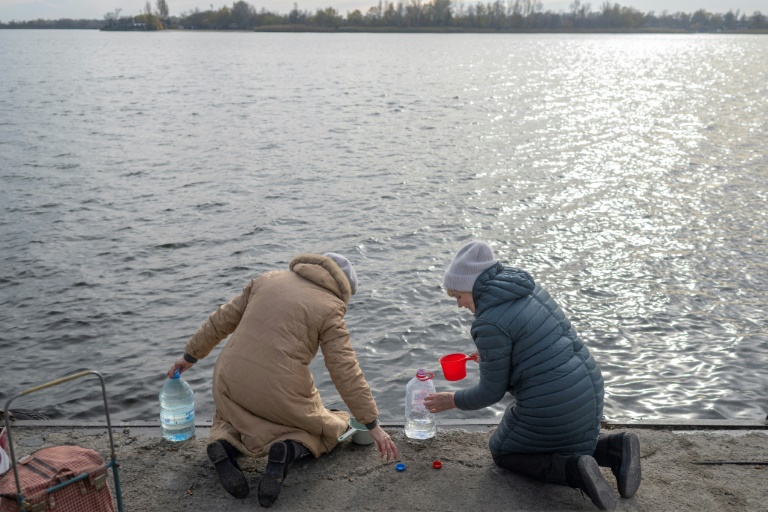 You have to descend the steps, go to a pontoon and crouch dangerously. Without water for days, residents of Kherson in southern Ukraine draw water from the Dnieper River, which now borders the city.

Before they withdrew last Friday from the city they had occupied for eight months, Russian forces destroyed several energy infrastructures.

While the Ukrainian army has captured Kherson, built on the right (west) bank of the broad river, the left bank is still under Russian control.

“A week ago, the water supply system was damaged. Since then, we have had no electricity, no water, so we are fetching water here for our sanitary needs,” explains Tatiana, who was walking with her daughter and her boy.

From their wheelbarrow, they take out several large plastic bottles that they are going to fill with water from the river, which is very small and yellow.

The concrete pontoon is slightly higher. You have to kneel down to reach the surface of the river with your hand. Exercise is difficult, especially for older people.

To fill the containers, some people use a bucket, a funnel, a plastic cup, or a milk jug held by a string.

“It’s already been five days without water, a week without electricity. I knew it was going to happen. So I stocked up on water,” said Olga Zhenkulova, 41, as she finished work and loaded her bottles into the trunk of her car. .

In the parking lot opposite the pontoon, the traffic is non-stop.

A man loads a dozen large cylinders into his van. He runs a cafe-bar and gives some to the neighborhood.

For drinking water, reservoirs are available in the city and some can be found commercially.

Known for its shipyards, Kherson (280,000 people before the war) has a river port and another for trade.

A cargo ship is moored near a pontoon filled with bottles. Since the Russian invasion of Ukraine began on February 24, maritime traffic on the Dnieper, which flows into the Black Sea, has been suspended.

A little further up, at the site of the Eternal Flame, a World War II memorial overlooking the river, dozens of people stare at their mobile phones.

Shortly after Moscow captured Kherson in March, the Russians cut off its telephone network.

But in the quiet waters of the Dnieper and near the great monument that dominates its entire left bank, Russian mobile networks can be picked up. These do not have names, but numbers: 2494 and 2596.

Vita Morshivska, 55, keeps talking with the phone to her ear. Beside her, her husband listens to the fifteen-minute conversation. On the other end of the line, their children.

“They are in Crimea,” the peninsula annexed by Moscow in 2014, the woman explains.

“They left at the beginning of the war, in April … They wanted to come back in August, but they didn’t succeed. They were going to cross the Antonov Bridge, but the bridge was destroyed. They hurt themselves.” she adds.

Antonov Bridge crosses the Dnieper in the northeastern suburbs of the city.

Ukrainian rockets struck while it was under Russian control, detonating a portion of the structure on the right bank with explosives shortly before the latter fully withdrew from the area.

The last bridge before the Black Sea led to Olechki, 5 kilometers away, still occupied by the Russians.

On Monday afternoon, a thick plume of smoke was seen drifting towards the city.

As a result, Ukrainian artillery fire continued to be heard around Kherson and aimed at Russian positions.